With investigative help from UT San Diego, the Center for Health Reporting of the California HealthCare Foundation (CHCF) conducted a study of nursing home deaths and nursing home abuse in San Diego County. Early this month, UT San Diego reported the shocking system failures when it comes to assisted living care in our state. 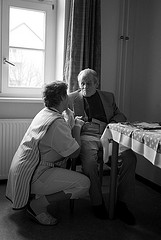 Looking at the statistics from assisted living homes is an eye opener. Since 2008 alone, “at least 27 San Diego County seniors have died from injuries and neglect suffered in the facilities,” according to UT San Diego. These institutions are responsible for “ensuring that seniors can live in affordable, homelike settings rather than in expensive, institutional nursing facilities,” said UT San Diego.

If you have an elderly parent who currently resides in an assisted living facility or nursing home, you want to make sure that they’re receiving the best possible care. If you suspect that your loved one may be experiencing nursing home abuse and neglect, it’s never too early to contact an experienced elder justice advocate. The attorneys at the Walton Law Firm can answer your questions today.

And what’s worse is that the stories behind these deaths were never made public by the state. Indeed, none of the state regulators, prosecutors, and police involved in any of these cases let the public know what was happening in certain assisted living homes in San Diego County. Based on records from the California Department of Social Services (DSS), in some of these cases, the state didn’t even launch a formal investigation or penalize the assisted living facility. In the 18 cases where the state investigated the death, only 12 were subject to a fine, and the fine wasn’t much. In fact, the fines for each death were only $150, “the maximum allowed by law.”

It’s very concerning that many of these cases weren’t subject to more intense scrutiny, especially since deaths “are a tiny fraction among the population of about 14,500 residents living in 640 homes in San Diego County,” according to UT San Diego. But is the state doing a sufficient job monitoring these facilities? According to representatives from some of these assisted living homes, there are many residents who are happy living in these facilities. But is that enough evidence that families are choosing the right assisted living homes for their elderly loved ones?

Apparently, state regulators use “an antiquated computer system” that is “incapable of tracking the deaths” in these facilities. As a result, the state doesn’t have a clear idea of how many seniors have died as the result of negligence in some of these assisted living facilities. Moreover, the paper records aren’t especially clear. As a result, the statistics for deaths in San Diego County assisted living facilities only reflect those that “government records describe as caused by poor care.” What about accidental deaths that could have been prevented?

The senior deputy for the California Department of Social Services, Pat Leary, indicated that the safety issues coming to light in these facilities represent “an area of great concern” for DSS. However, Leary explained that DSS currently faces the barriers of “budget cuts and outmoded technology.”

The investigation uncovered staggering stories and statistics about these facilities. Hopefully, the report will be a significant call to action for DSS. In the meantime, you shouldn’t have to worry about your elderly loved one’s safety and care while they reside in assisted living homes in our state. If you have questions or concerns, don’t hesitate to contact the experienced nursing home abuse attorneys at the Walton Law Firm to discuss your case.