The San Diego nursing home neglect lawyers at the Walton Firm have learned about another appalling case of elder abuse and neglect. A San Diego woman is accused of elder abuse of a 93-year-old WWII veteran. The woman, 62-year-old Milagros Angeles, allegedly stole money from the victim and also failed to provide adequate care for him. The abuse came to light when bank employees became suspicious after the victim, Arnold “Max” Bauer, stopped coming in to do his banking. Investigators from Adult Protective Services checked on the elderly man and found him living in squalid conditions.

Elder abuse can often be hard to detect and is usually underreported. It can include falls or fractures, malnutrition, bed sores, infections, and poor maintenance of facility conditions.

In addition to California elder abuse, the victim’s caretaker in this case was charged with false imprisonment, theft by a caretaker, and possession of altered checks. According to reports by 10news.com, the victim’s home was littered with trash and rat feces. Dirty dishes and rotten food covered the kitchen counters. The caretaker allegedly lied to the elderly man’s family, telling them that he was fine and eating well. 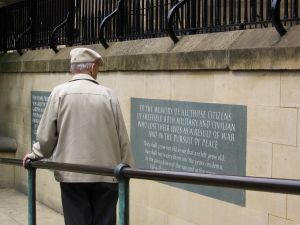 Investigators also discovered that the caretaker had written 56 checks to herself totaling $5,600 and had $9,000 cash in the her bedroom and clothing. The accused caretaker also wrote other checks totaling $1,800. Evidence was also found indicating that the woman was sending money back to the Philippines, her native country.

Unfortunately, this case is another example of a negligent adult caretaker taking advantage of one of society’s most vulnerable citizens. The elderly victim suffers from dementia, fought in the U.S. Military, and survived the attacks on Pearl Harbor when he was serving on the USS Vestal. When investigators found the victim, he was disoriented and had a severe urinary infection. He was later diagnosed with prostate cancer, for which he is now receiving treatment. He currently lives at a California nursing home.

The accused caretaker has pled not guilty and is currently awaiting a mental competency trial to determine whether she is competent to stand trial. At the competency trial, the trier of fact will determine whether the woman understands the nature of the charges against her and whether she can assist in her own defense. If found guilty of these charges, she could face over six years in prison.

Our San Diego elder abuse attorneys know it is not easy to think that a loved one may be neglected or abused. We understand the pain and frustration that negligent nursing home practices can cause to you and your loved ones. We also know that our elders deserve the very best care and attention possible. The first step in stopping elder abuse is identifying the signs and symptoms of abuse. If you notice changes in a friend or loved one’s behavior and you suspect abuse, report it to your local adult protective services agency as soon as possible or call 911 if the danger is immediate.

Remember, inadequate care, poor or unsanitary living conditions, and other forms of elder abuse or neglect is against the law. Please consult a local elder abuse attorney for more information.