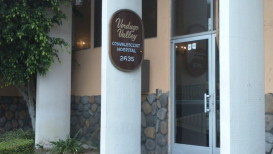 A skilled nursing facility in Montrose was indicted for criminal abuse and neglect after a committed suicide by discharging a fire extinguisher down his throat. A grand jury indictment asserts that the facility, Wellness Centre, and its former administrator were complicit in the death of 34-year-old patient Charles Morrill. It was the third time Morrill attempted suicide.

“On and between January 22, 2009 and February 28, in the County of Los Angeles, the said Verdugo Valley Skilled Nursing Wellness Center and Phyllis Paver did, under circumstances and conditions likely to produce great bodily hard and death, knowingly and willfully cause and permit Charles Morrill, a dependent adult, to suffer, and inflicted theron, unjustifiable physical pain and mental suffering and, having the care and custody of said person, willfully caused and permitted him to be placed in a situation in which his health was endangered, and knew and reasonably should have known that said person, Charles Morrill, was a dependent adult.”

The indictment came after an investigation by the California Department of Public Health, which had a long history with the facility. Glendale Police told reporters that over the last few years it had received numerous calls about residents wandering away from the facility, 911 hang ups, and accusations of assaults at the nursing home.

Criminal indictments of nursing homes is exceedingly rare. While neglect and abuse are rampant, criminal prosecutions rarely occur because of the heightened burdens of proof, and the difficulty in proving an intent to cause harm. Morrill’s family also have a personal right to bring a civil action against the nursing home for monetary damages under California’s Elder Abuse and Dependent Adult Civil Protection Act.

The Walton Law Firm provides free consultations to individuals and families throughout Los Angeles County who believe a loved one has been neglected in the nursing home, assisted living, residential care, board and care, or home health care setting. Call (760) 571-5500 or (866) 607-1325 for a free and confidential case evaluation.